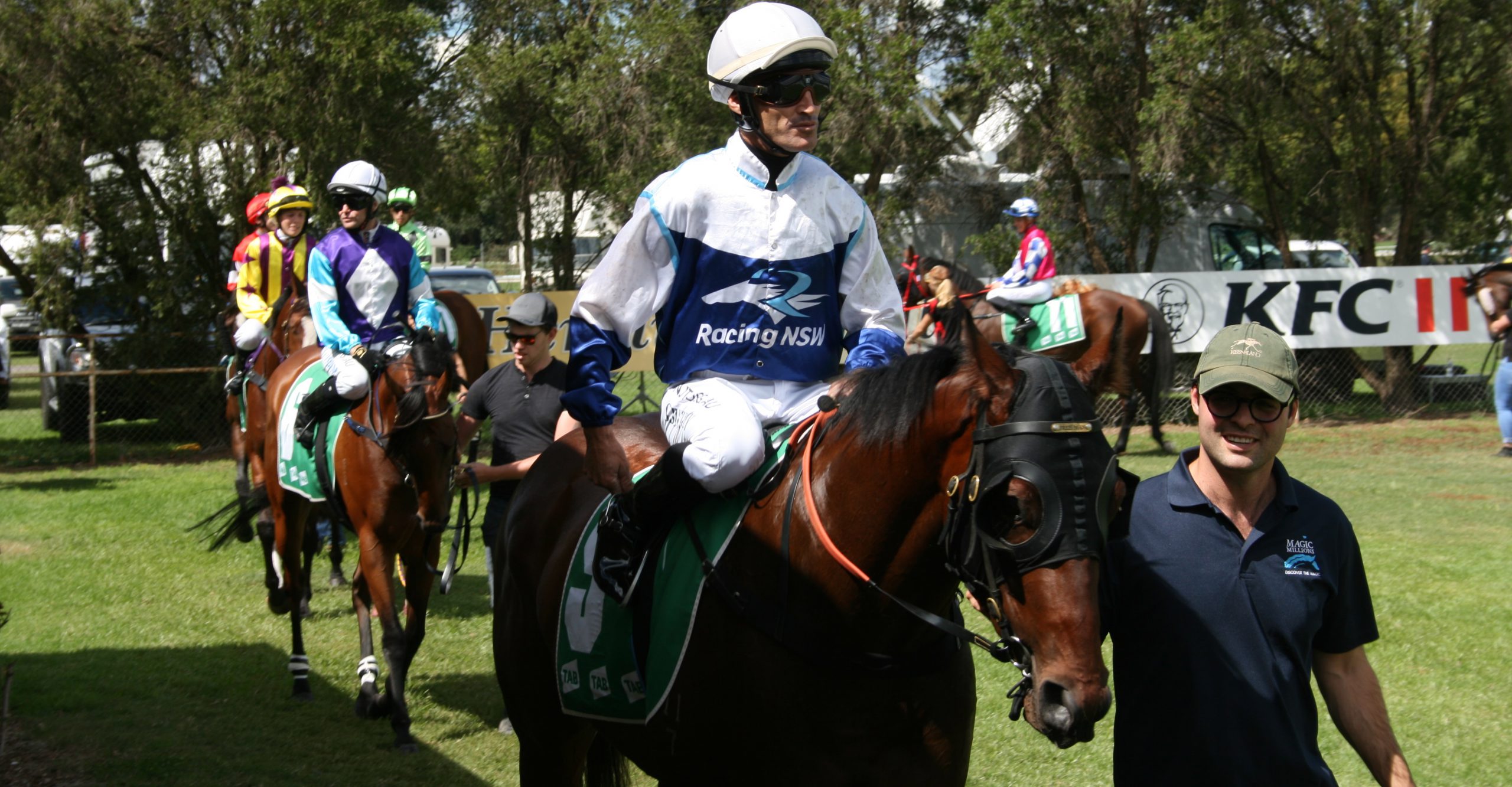 Apprentice jockeys and pre-approved riders are reminded that an online Apprentice School session will be held in the month of April on Wednesday 21st from 10:30am to 1pm.

Nutrition will be covered for this session, to be presented by expert speakers, including current senior jockeys.

Attendance is compulsory for all pre-approved and apprentice jockeys. 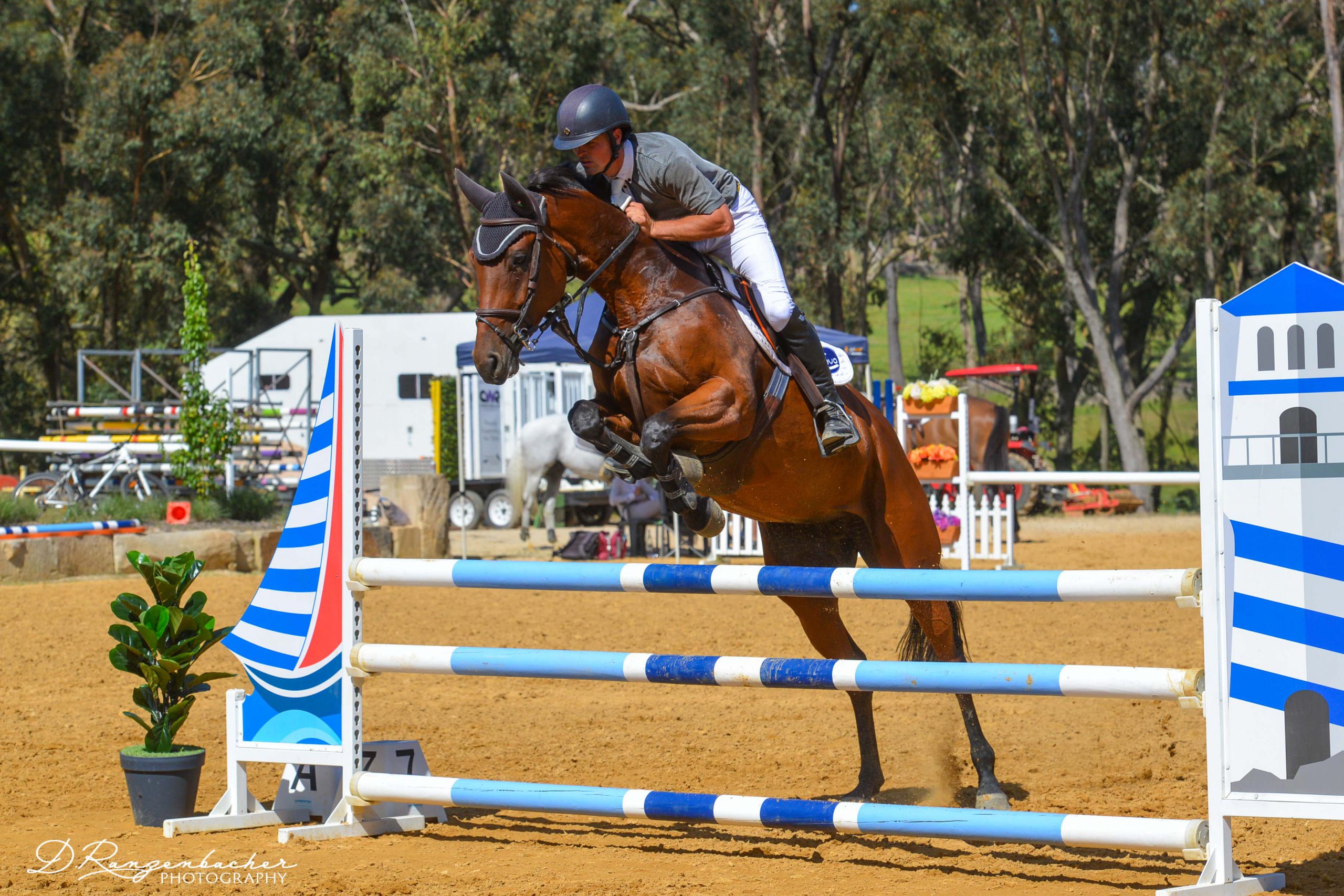 Leaning against the fence at the side of the course, a group of proud owners crane their necks towards their horse as she approaches the starting point.

“She looks fit, doesn’t she,” one says. “I hope she goes well,” says another.

This isn’t a racing syndicate, although the entire group is made up of racehorse owners. They’re part of the Gai Waterhouse and Adrian Bott initiative, Own After Racing.  OAR, for short, is the concept of talented equestrians Nelson Smyth and Jessica Bott who both grew up competing on Thoroughbreds. OAR members support retired racehorses in their retraining and get to go along and watch them compete in their new careers off the track.

“We wanted to create opportunities for racing fans to be involved with Thoroughbreds long after they have run their last race,” Jessica said. “It provides good outcomes for the horses and a fun and unique social event for the owners,” Nelson added.

Having already had a positive experience with Racing NSW’s equine welfare and rehoming division, Team Thoroughbred NSW, Jessica and Nelson again turned to the program to source their first retired racehorses for OAR. In 2018 Jessica adopted three retired racehorses from Team Thoroughbred NSW, including former Phillip Sweeney-trained mare Raise An Angel, who is now a competitive showjumper.

“I think it’s important to support the industry’s rehoming program wherever we can,” Jessica said.

“We look for physically and mentally sound horses,” Nelson said. “It can be hard to pick from the paddock, but we know we get an honest assessment of each horse, including its veterinary history, when buying them from Team Thoroughbred NSW.”

OAR is operated out of a leased 60-acre property at Somersby on the Central Coast. All Thoroughbreds coming into the program are given time to settle in before beginning their training. Nelson’s sister Libby, another accomplished equestrian, helps with the riding, as do some of Gai and Adrian’s stable staff members. The horses are educated from square one, as you would a breaker. Rather than turning them over quickly, the focus is on providing solid training.

“We aim to produce quality horses for showjumping which will in turn improve the profile of the breed in that sport,” Jessica said. “You can get real value for money from Thoroughbreds, but you need to put the time and effort in to train them properly,” Nelson added. “A Thoroughbred doesn’t have to be a good racehorse to be a good sport horse either.”

As part of their re-education, the horses are taken out to competitions and shows. Stonewall Equestrian, owned and operated by Krissy and Heath Harris, is just up the road from OAR’s base and boasts state of the art facilities in beautiful surrounds.

“Stonewall is the type of place where you want to bring clients,” Jessica said. “Krissy’s competitions are always well run, and the atmosphere is relaxed and friendly. She gets owners involved in the presentation of rugs to winners. Some of the OAR owners ended up sponsoring Stonewall events because they had such a great time.”

The OAR horses seem to enjoy it as well. In their first 70cm showjumping class at Stonewall Equestrian, Arrossire came 3rd, Pexian 4th and jockey Rachael Murray, who was the first female to ride 100 winners in a season, came 5th on her off the track Thoroughbred, Mr Pumblechook.

“There are a lot of racing people who are also involved in equestrian disciplines, especially jockeys,” Jessica said. “Rachael, Kathy (O’Hara) and Jeff Penza are often out and about.”

Gai and Adrian are also very supportive of OAR and come out and watch the horses in action whenever they can.

“Adrian came to Stonewall one day and saw Chris Waller had his name on a jump so next thing Adrian is sponsoring a jump too,” Jessica said with a laugh.

The Thoroughbreds in OAR are eventually sold to loving new homes, with proceeds reinvested into the program to produce more horses. Pexian is now the pride and joy of a teenage showjumper, while the team is still putting the polish on Arrossire. Some new retired racehorses have recently been welcomed into the fold too including former Kristen Buchanan mare Oakfield Shawne, former Tracey Bartley mare Amelika and Keith Dryden’s one start wonder, Halo Diablo.

“All the horses we have are showing plenty of scope and talent,” Jessica said. “We are really excited about them. We’re excited about the whole program. OAR has been better received than I could have ever imagined, and I am so grateful to everyone who has supported our little idea.”

This story was originally published in the March issue of Racing NSW Magazine. 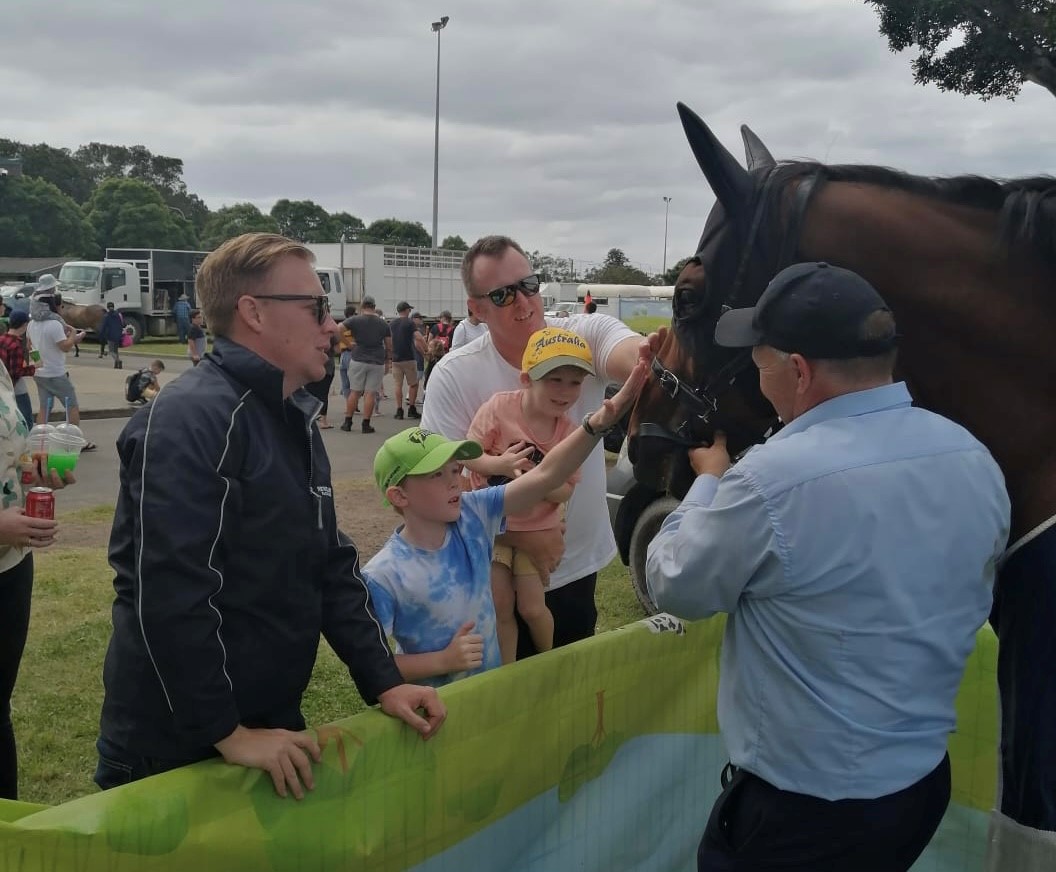 While Happy Clapper is famous for his impressive Group 1 victories at Royal Randwick, Newcastle was also a happy hunting ground for the people’s horse. He raced there twice for a win in the 2017 Group 3 Newmarket Handicap and a 3rd in the 2013 Group 3 Spring Stakes – his first stakes placing.

Over the weekend, the now ten-year-old gelding returned to the City Of Steel, not to race but as a celebrity guest at Newcastle Regional Show. It was his first public appearance since retiring from racing in April 2020 and there was no shortage of old and new fans lining up to snap a selfie and give him a pat.

Despite the unfamiliar environment and sounds of a busy carnival, Happy Clapper was on his best behaviour and lapped up the attention. He looked every bit the $7.3million-winning champion the racing public had come to know and love.

Draped in a blue silk rug, Happy Clapper represented Racing NSW’s equine welfare and rehoming division, Team Thoroughbred NSW, which now cares for the legendary galloper. When time was called on Happy Clapper’s stellar racing career, trainer Pat Webster and owner Michael Thomas made the decision to retire him to Team Thoroughbred NSW’s Sydney facility, Bart’s Farm (formerly Princes Farm.) It’s one of four properties owned by Racing NSW for the purpose of caring for and retraining retired racehorses and those who didn’t make the track. Happy Clapper shares a paddock with fellow Group 1 winner and dual Everest winner, Redzel, while His Majesty and Stampede are just over the fence.

The appearance at Newcastle Regional Show marks the completion of Happy Clapper’s transition from racehorse to off the track Thoroughbred. Unlike most of the other retired racehorses at Team Thoroughbred NSW, Happy Clapper is not available for adoption. Instead, he will continue as an ambassador for life after racing.

Happy Clapper fans can look forward to seeing him in Sydney over the Autumn Carnival and at other community events in years to come. 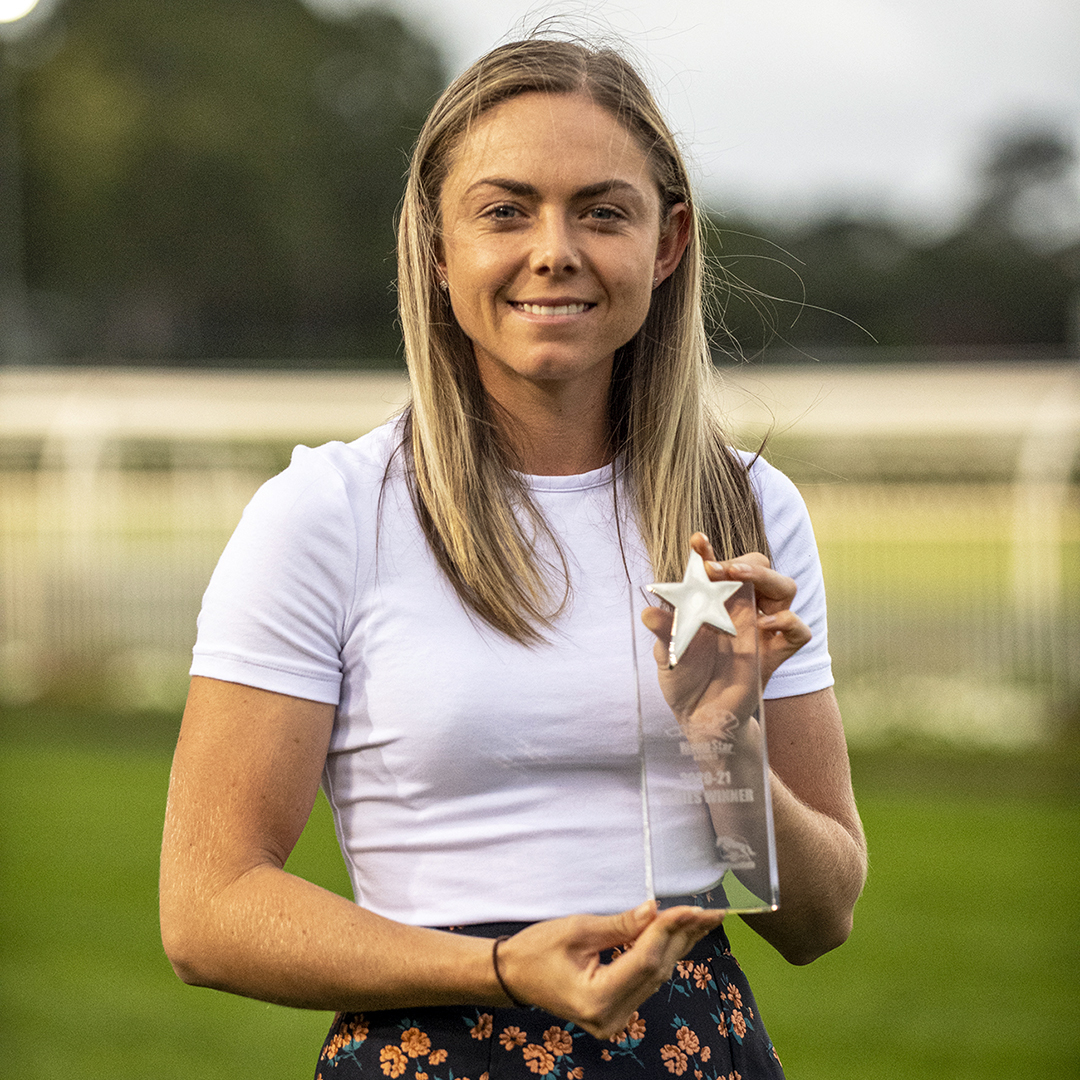