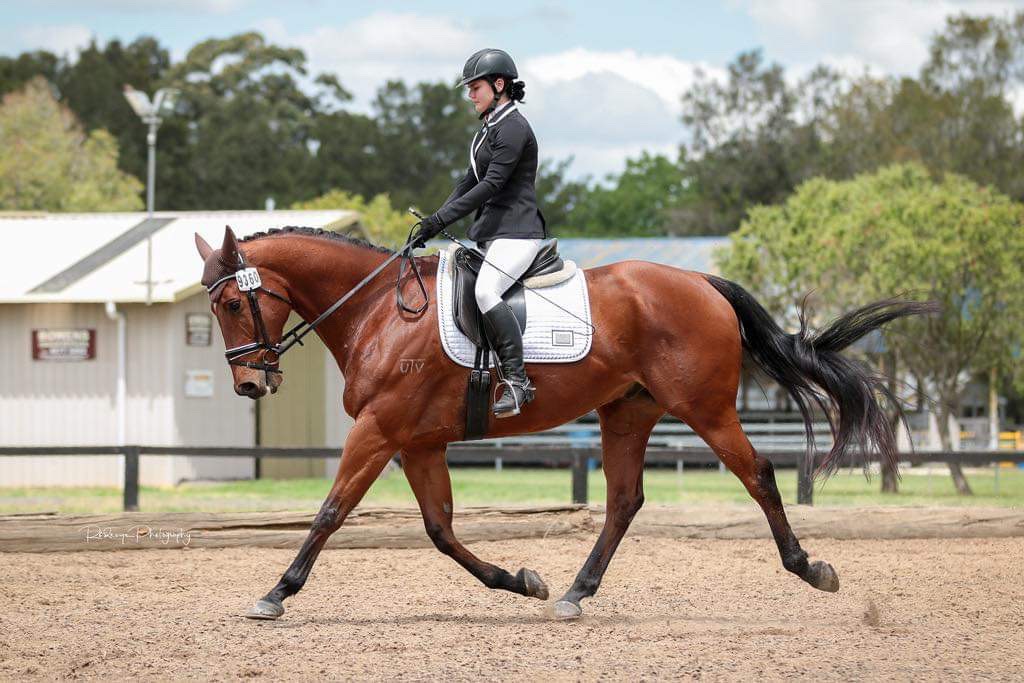 While Isabel Roach’s friends were heading off to Schoolies Week, the then eighteen-year-old was heading to the stables.

“Everyone I knew spent the money they had saved throughout the year on a holiday but I decided to buy myself a horse as a graduation present,” she said.

Isabel had leased an unraced Thoroughbred since she was fifteen but longed for a horse of her own and with the HSC done and dusted the time was right.

“A friend of mine was studying animal science and had visited Racing NSW’s Thoroughbred Rehabilitation Trust when it was at Canterbury Park,” Isabel said. “She told me all about it and before I knew it, I was there.”

Isabel went there to choose a horse but former Kim Waugh-trained gelding Kreskin chose her.

“I walked in and he popped his head up to say hello,” she said. “I thought he was so cute and loved his personality straight away. It wasn’t long before I was filling out the forms to adopt him.”

Isabel initially wanted to do eventing with Kreskin but her coach was adamant she had to master the principles of dressage first. She fell in love with dressage and never looked back.

Fast forward to July this year and after hundreds of hours in the saddle Isabel and Kreskin had qualified for the Australian Youth Dressage National Championships.

“It took us about six months to qualify because we had to get four qualifying scores at state level competitions,” Isabel said. “It felt so good to be up there with the “big kids’’ on my off the track Thoroughbred.”

Isabel and Kreskin placed 10th in Australia in the Young Riders category.

“It was amazing to finish in the top 10 at an event where I was just happy to be there.”

After Nationals, Isabel was determined to consolidate Kreskin’s skills before stepping him up to a higher level. Happy with his progress, Isabel will ride Kreskin in the Elementary 3A and 3B classes at Clarendon on Saturday.

“I’m really hoping to score 62% or higher but it would be nice to finish in the top 10,” Isabel said.

It’s been an outstanding year for the pair, made even more impressive by the fact Isabel has juggled a double degree and two jobs. She spends every spare moment with Kreskin and it has paid off.

“He’s a beautiful and kind horse and certainly very trainable but he does get flustered sometimes so I have to keep our workout short and sweet to keep him focused,” Isabel said. “I think it’s important to know your horse’s limits, know how much he can take and not push him beyond it.”