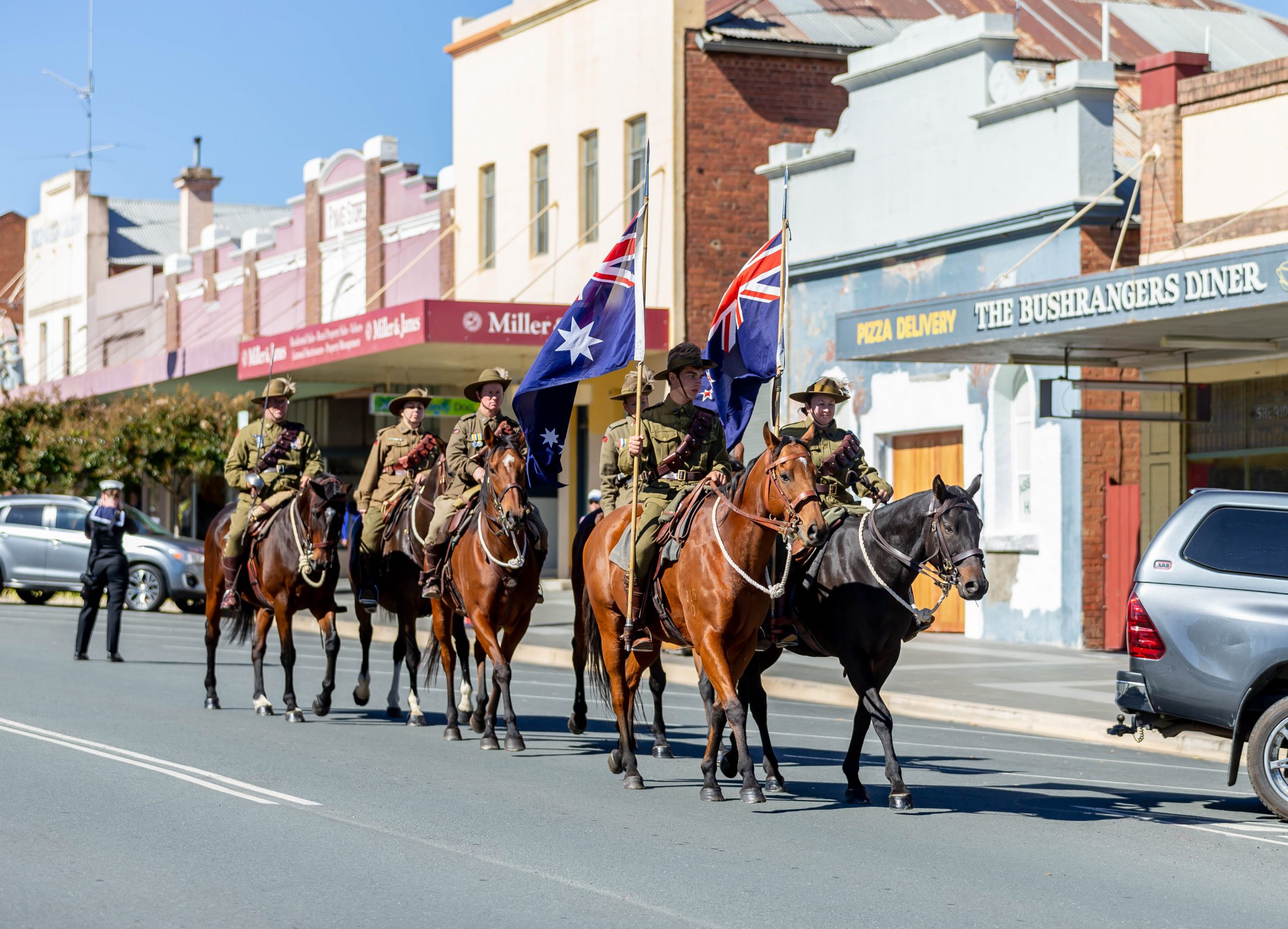 Sitting astride seasoned Wagga galloper Zarlu, Brad Clark’s heart is pounding. It’s something he has done literally hundreds of times before, but this time is different. It is their first ANZAC Day Dawn Service together as part of the 7th Light Horse Gundagai Troop and Brad is determined to nail it. They had practiced from sunup ‘til sundown the day before, leaving nothing to chance.

It was the first of four services the 7th Light Horse Gundagai Troop would take part in that day. After the Gundagai dawn service, they raced up to Tumblong’s morning service, then it was back to Gundagai for the march, and finally onto Jugiong for its afternoon service. Brad need not have worried. They all went off with military precision.

“It’s an important day in Australia’s history and it was honour to be part of the commemorations,”
Brad said. “My pop on my mum’s side, Thomas Patrick Hampton, was a light horseman so that made it even more special.”

Since retiring from race riding after more than 20 years as a professional jockey, Brad has been an active member of the 7th Light Horse Gundagai Troop which performs historical re-enactments to keep the traditions of the Australian Light Horse alive. The troop was co-founded by Brad’s friend, popular Gundagai horseman Luke Dowell and his father Ronnie in 2012. He had been working with Harden-Murrumburrah’s Light Horse Troop and wanted to form one in Gundagai so he teamed up with former Police Officer Wes Leseberg and a handful others to make it happen.

Tragically, Luke was killed in a road accident in 2017. He was travelling home from work near Wanterbadgery when his ute rolled off the road. Luke left behind a heartbroken wife, devastated twin children and countless shattered family members and friends. Brad had always helped organise the 7th Light Horse Gundagai Troop performances, particularly at the races, and had intended to become more involved but this provided stronger motivation than ever. He made a promise to Luke’s wife Kerrie Stewart he would help foster and support Luke’s dream. Kerrie remains a committed member of the troop as the Treasurer.

Currently there are 20 members of the troop including a handful of non-riders who participate in the re-enactments. They range in age from Wes’ daughter Olivia who is eight to Wes’ father Paul who is 74. The Jugiong service marked a special milestone for the Leseberg family as it was the first time Wes, his wife, their daughter and Wes’ father had all performed together.

“Having three generations from one family doing something we love together is really special,” Wes said.

The breed of choice for the troop is the Thoroughbred with almost all of the mounts coming off the track from around the Southern Districts. Owners often approach troop members to adopt their retired racehorses because they want them to be part of something meaningful.

“Most of the troop is connected to racing somehow,” Wes said. “Dad has always had horses and we’ve bred and raced our own. The Thoroughbred is such a versatile breed and it’s important to give them a quality life after racing. Besides, why have a Mini Moke when you can have a Ferrari!”

Once they come into the troop the horses do a lot of desensitisation to get them ready for large, noisy crowds and the sounds that come with re-enactments including gunfire. Leading into an event, preparation starts a minimum of six weeks in advance.  The horses are worked at least every second day and intensive training sessions are held on weekends. Wes’ horses are used daily for cattle work at his family farm in Jugiong so they are always ready to go.

Brad has ridden several horses in the troop in a race but none are more special to him than Zarlu. He rode him in track work daily and was in the saddle for seven of his nine race wins. As he was nearing the end of his racing career, Brad reached out to owner Bill Prigg and asked if he could adopt him when he retired.

“When I told Bill what I wanted to do with him he was thrilled and agreed straight away,” Brad said. “Zarlu was always a dream to ride. I would let the apprentices ride him for confidence. It’s no surprise he has been such a delight to retrain. He lives at a friend’s property on the outskirts of Wagga and I ride him every weekend. Even my 14-year-old daughter likes to ride him.”

The 7th Light Horse Gundagai Troop can be booked for almost any event and while commemorative services like ANZAC Day and Remembrance Day are done for free, they do charge a small fee for re-enactments and other performances to help cover their costs. They have a collection of uniforms ranging from the 1620s to WWI and also have the corresponding replica weapons.

“It’s not about us, it’s about helping people remember the sacrifices of those who have gone before us,” Wes said.

Prior to the arrival of Covid-19, the troop was due to travel to South Africa to help train the anti-poaching rangers who patrol the national parks. While they can’t take their horses with them, they are hoping to go there next year and continue with the program as planned.

“I’m proud of our horsemanship and everything the troop continues to achieve,” Wes said.

This story originally appeared in the June issue of Racing NSW Magazine.