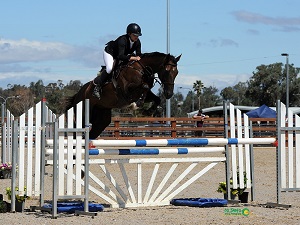 One of Elissar Maalouf’s favourite childhood memories is going to races with her father, Elie. Randwick, Rosehill, Canterbury, Warwick Farm. She loved admiring the horses, especially those owned by her Dad.

“My favourite was Grandiser,” she said. “He won four races from seven starts and even raced against the great Lonhro.”

By the time Elissar was 11 watching the horses wasn’t enough. She wanted to ride them. Her parents enrolled her in riding lessons and a year later she was confident enough to take on a horse of her own. Elissar’s then coach picked out a reliable Canny Lad gelding who was older than her. He never made the racetrack due to an oesophageal injury but had excelled in showjumping ever since.

“He came to me trained up and trained me up,” Elissar said with a laugh. “He was the most wonderful horse, never put a foot wrong. I learned so much from him.”

After a few years Elissar was ready for the challenge of a second horse she could train herself. She knew she wanted another thoroughbred and found the perfect match in a former Tara and Philippe Vigouroux gelding by the name of Still The Man.

“The day I first went to see him it was clear he was very green,” Elissar said. “He was a bit clumsy and unbalanced but came with the basics including trot, canter, left and right. He was so sweet and I wanted a horse I could take further so I adopted him.”

Elissar began retraining Still The Man straight away on an agistment property about half an hour from her home in Parramatta. She renamed him “Fresco” and spent all her spare time with him, teaching him to forget about being a racehorse and learn to be round and on the bit. In November 2016 Elissar and Fresco lined up for their first competition together – 80cm and 90cm events at Sydney Showjumping Club.

“He knocked over a few rails and had a tendency to drift but tried his hardest,” Elissar said. “Our second competition was better and you could see he was learning. He was a lot straighter. He’s just so eager to please.”

Since then the pair has participated in showjumping events at Hawkesbury, Tamworth, Camden and Sydney International Equestrian Centre at Horsely Park. Just last week they entered their first competition for 2019, going clear in the 90cm and knocking just two poles down in 110cm.

“That was due to rider error,” Elissar said modestly. “We’ll go clear next time. My aim is to step him up to 120cm this year and take him to more national shows.”

Elissar also has a goal of taking in one of hers or her father’s racehorses in retirement. Elissar currently has a small share in Salina Dreaming, an unraced two-year-old filly while her father part owns Through The Cracks. Both are trained at Gosford by Angela Davies.

“Retraining one of our ex-racehorses and competing on it would be the ultimate full circle experience,” she said. “I’ve only ever sat on thoroughbreds and never felt the need for a chunky warmblood when I have such athletic and willing thoroughbreds to work with.”